The restoration process for the Blue Garden began in 2012 when digital copies of original plans and photographs were retrieved from the archives at the Frederick Law Olmsted National Historic Site in Brookline, Massachusetts.

Landscape architects from the Cambridge-based firm Reed Hilderbrand, historian Arleyn Levee, and a team from Parker Construction of Providence, evaluated the site and its remaining features. Work was done under the guiding hand of Peter Borden, who with the client, Dorrance Hamilton, a noted philanthropist with a deep interest in preservation, had restored the Surprise Village Farm a decade before, also built by Arthur Curtiss James, now SVF Foundation. 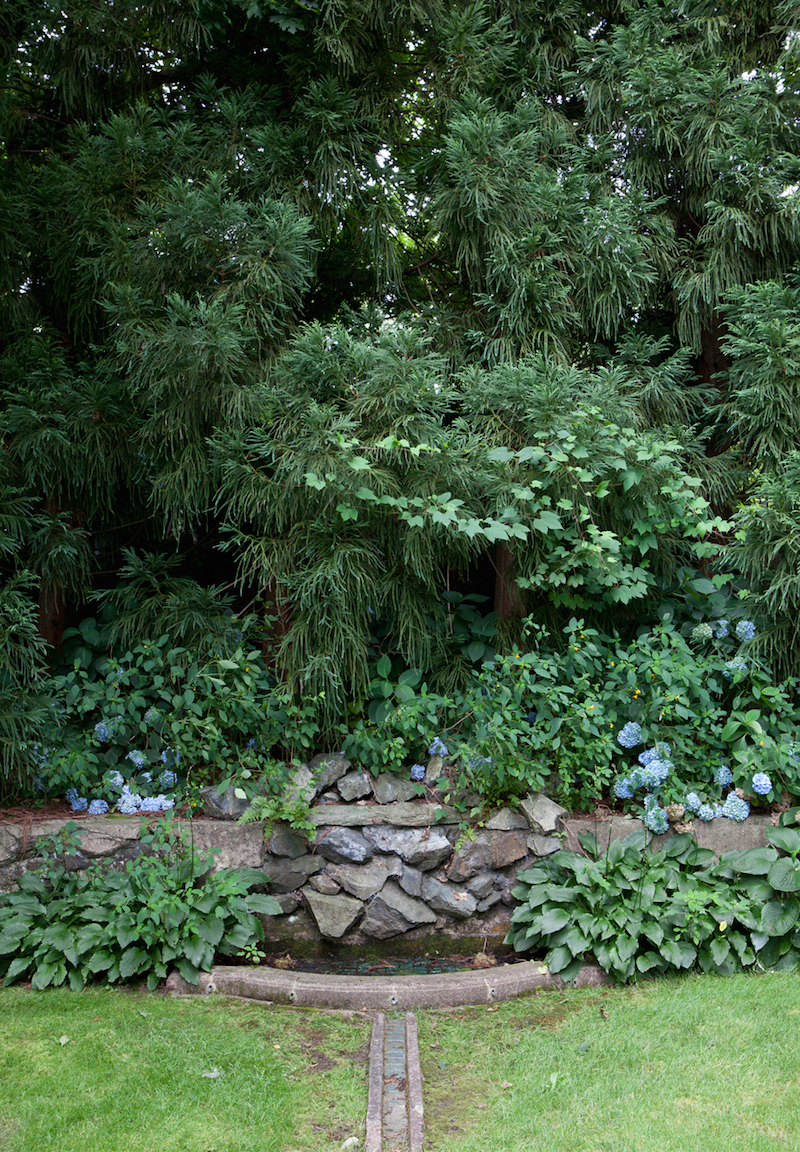 The lawn terrace of the former south pergola, once framed with granite columns in front of a rock garden and waterfall, was completely overgrown. The small sculptural water feature on the head pool had been removed and replaced with fieldstones. 2014 © Marianne Lee Photography

At one end of the garden, a contemporary house, swimming pool, and driveways had been built where the north pergola and tennis courts once stood. Closer study of the site conditions began after invasive tree and vine removal and after excavation of the wall foundations, the south pergola steps, pools and runnel, and the underground water systems. A new concrete retaining wall was built along the property line where rubble had been piled during construction of the neighboring house.

When new property lines for the subdivision were drawn in the 1970s, a corner of the south pergola was bisected, requiring the structure to be built twelve feet forward of its original location. This proposal was similar to several early Olmsted studies, solving the challenge of where to locate the pergola, yet be true to the original intent of the Olmsted plans. The pergola, a character-defining architectural feature, was also within a zoning setback and required a variance from the Newport Zoning Board of Review to be reconstructed.

Archival plans contained extensive construction drawings for the garden’s structures, including the pergolas, tiles, pool coping, trellis, and metal gates. A team of architects was able to reference the historic drawings and details and translate them into updated construction documents for structural engineering review, so all built components met contemporary building codes. With the advice of a masonry conservation consultant, the walls, tiles, and pool copings were cleaned to reveal their true color. The small sculptural figure attached to the basin on the south pergola wall — the source for the runnel water — was recreated in a material to match color and texture of the original ceramic sculpture. Likewise, many of the extant glazed tiles in the runnel and south pergola floor, and around the reflecting pool, were replaced.

Although there were detailed plans and sections for the original pools and runnel, a new system was designed using contemporary fountain technology. The system is housed under the new greenhouse and consists of three pumps that recirculate water to each of the water components — the basin that feeds the runnels, lily pond, and reflecting pool; a manifold for the spray jets; and the north pergola lotus ponds. The filtering system was designed to be chemical-free and safe for plant life, utilizing charcoal filters and UV sanitization. 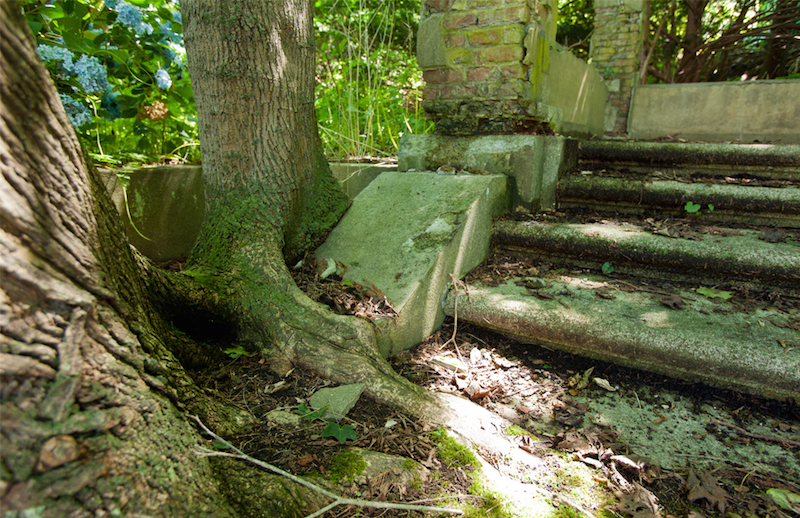 Remnants of the south pergola included steps, tiles, and walls that were removed, preserved, and repaired, or used as molds to recreate missing pieces. 2014 © Marianne Lee Photography 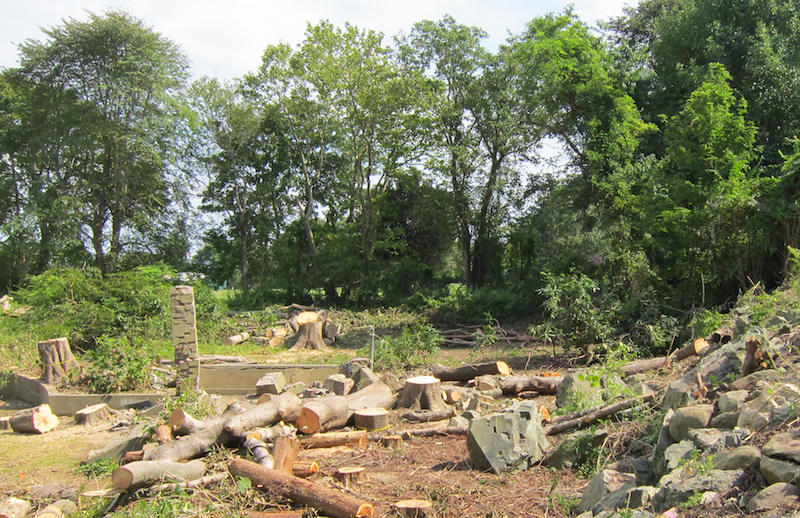 After removing the trees, site features such as the rubble wall that held grade at the property line where the south pergola once stood, were readily accessible. 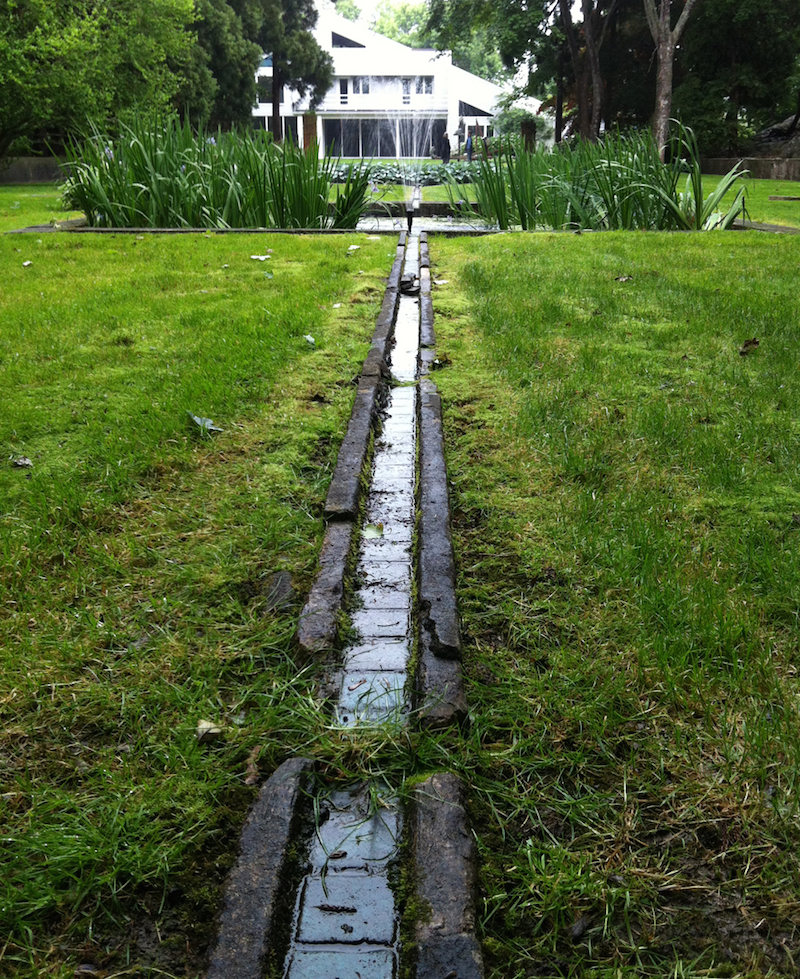 In 2012, the view across the lily pond and long pool was to the house built in the 1980s, where the north pergola once stood. The house was removed with permission from the City of Newport Historic District Commission. Materials that could be reused were donated to Habitat for Humanity, or recycled. 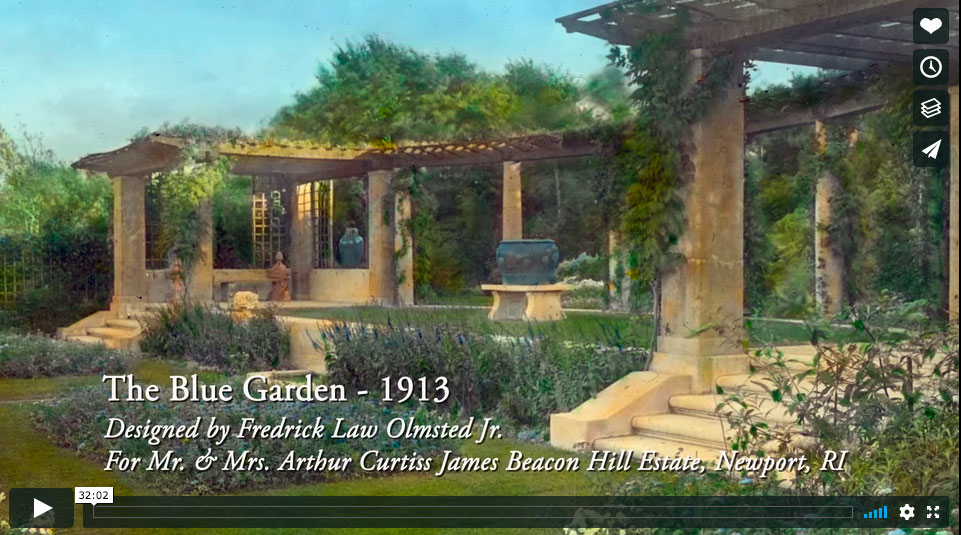