They chose the younger brother, Frederick (Rick) Law Olmsted Jr., whose accomplishments were already legion, to manage the project. For the mansion, they hired the young architecture firm of John Mead Howells and Isaac Newton Phelps Stokes from New York City. 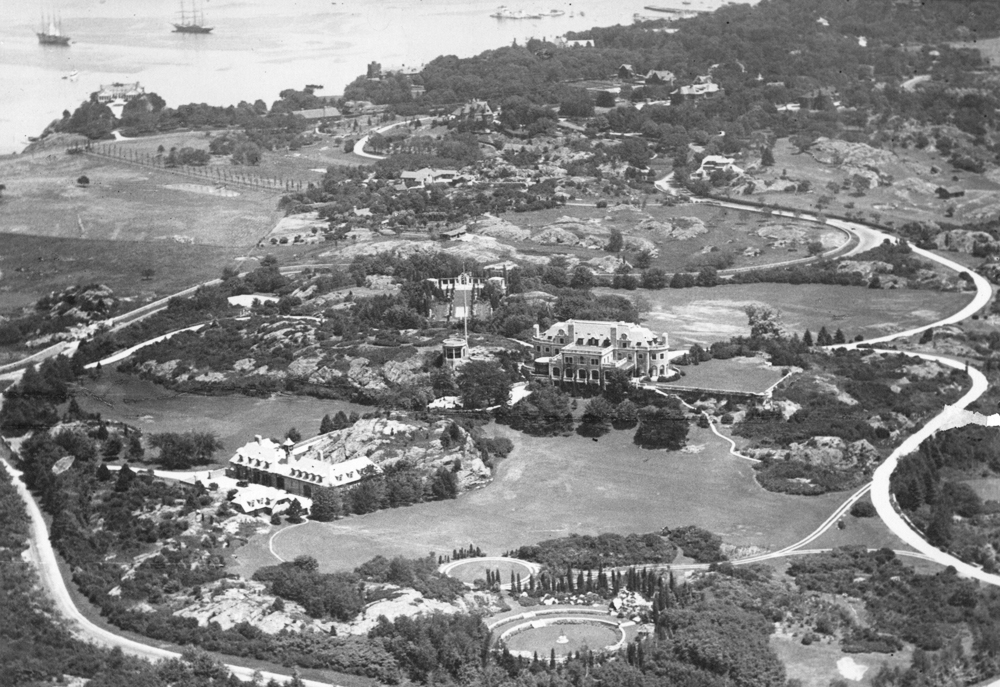 The view in this late 1920s Aiglon aerial photograph is to the northeast, over the expanse of some of the James property. In the foreground are the amphitheaters and rose garden; to the left is the garage and carriage house. In the middle is the mansion on Beacon Hill ridge. The small circular Telescope House is on axis with the Blue Garden. Courtesy of the National Park Service, Frederick Law Olmsted National Historic Site.

Initial work on the property encompassed entrance and service roads, boundary walls and gates, a location for the garage and stables, and site infrastructure. In a hollow to the northeast, near the proposed tennis court, an “Informal Garden” was designated — the future location for Mrs. James’ Blue Garden.

From 1911–1913, plans for the Blue Garden were developed and refined. A cruciform shape, terminated at each side by a semi-circular apse, was delineated by low walls. Within the walls, planting beds and paths echoed the garden’s form, with a square pool at the center of the cross axis. At the southwest end of the garden an elevated pergola created a vantage point from which an uninterrupted vista along the garden’s axis, across the long pool and open lawn — the "plaisance" — was terminated by another elevated pergola at the northern end. 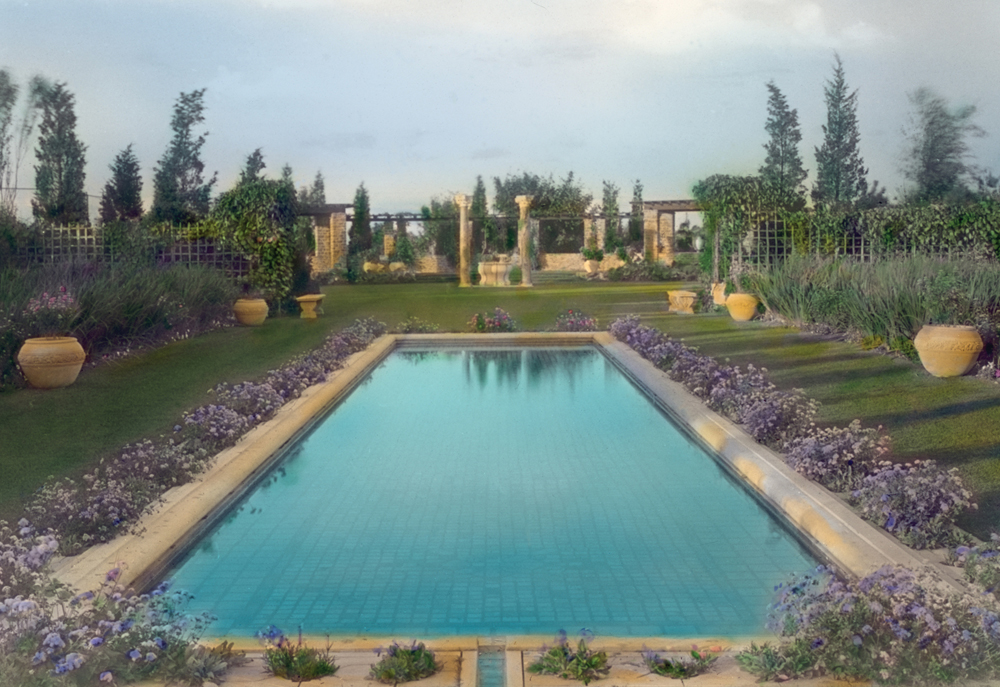 The long pool, connected with a runnel to the lily pond, was developed late in the design process. The pool was shallow and lined with blue tiles arranged in a Persian-inspired fashion, with fine spray jets along the sides. 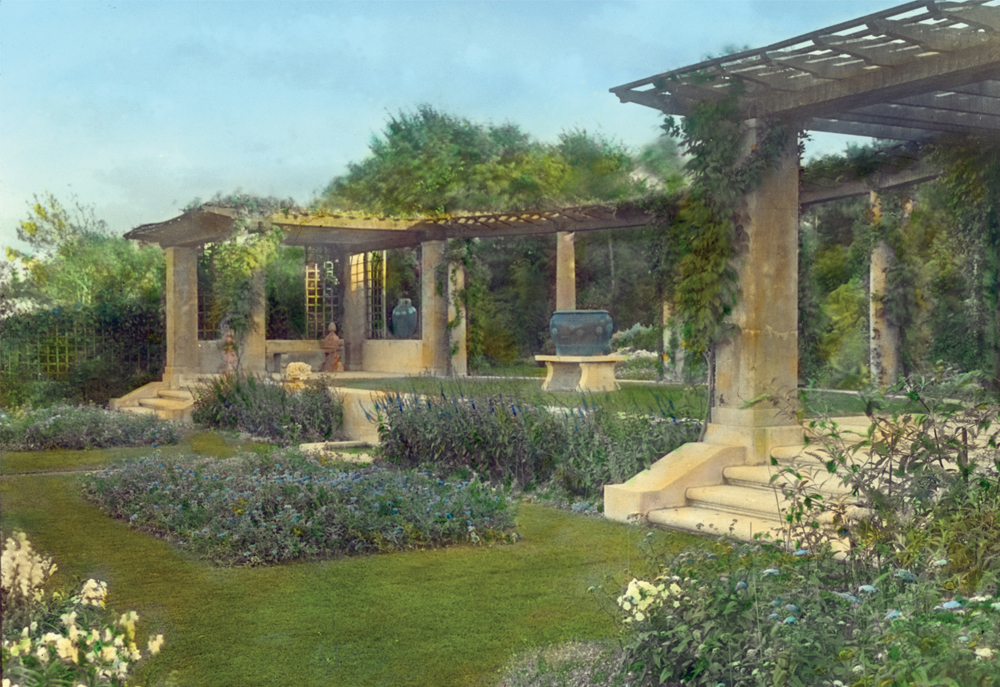 The south pergola was designed to incorporate granite columns Mrs. James wanted to use from the original mansion. Behind the columns a meandering waterfall and rock garden were designed to extend the space of the garden. 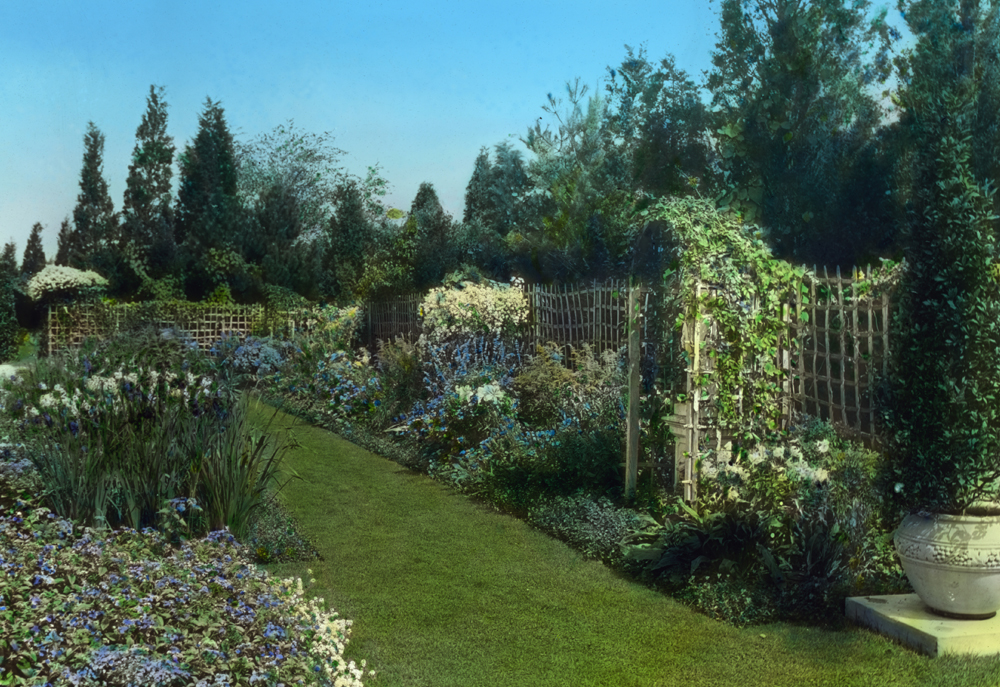 Perennials provided an expansive array of blue, blue-purple, and white flowers, while leaves of all shades of green through gray offered texture – some vertical and strappy, others feathery and shiny. Hand-colored glass lantern slides by Frances Benjamin Johnston, 1917. Courtesy of the Library of Congress, Prints and Photographs, Frances Benjamin Johnston collection.

This garden room was shaped to classical proportions and enlivened by an unusual horticultural palette requested by Mrs. James, “a monochromatic concentration of purples and blues.” Hidden behind a dense border of trees and shrubs, it was a secret garden, a hortus conclusus. From its opening celebratory spectacle, “The Masque of the Blue Garden” in August 1913, events in this garden were covered in detail by newspapers and periodicals across the country.

On August 15, 1913 a gala for 300 people, “The Masque of the Blue Garden,” celebrated the opening. There was a performance of musicians and dancers that was culminated with Amphitrite, the Greek goddess of the sea, leaping from a giant shell placed at the far end of the long pool. Courtesy of the Redwood Library and Athenaeum.

After the deaths of Arthur Curtiss and Harriet James in 1941, attention paid to maintain the Blue Garden, a labor-intensive property, plummeted. The mansion was devastated by fire in August 1967 and eventually demolished. The property was sub-divided into commodious house lots in the 1970s. Slowly, the plantings and pergolas of the once-celebrated Blue Garden were subsumed under a thick covering of invasive trees and vines. 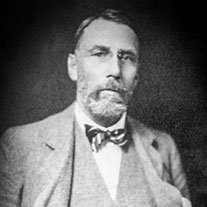 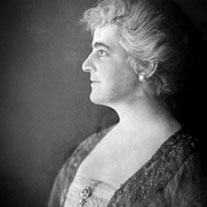 Arthur Curtiss and Harriet Parsons James were clients of vast wealth, well-traveled and knowledgeable, with discriminating artistic and horticultural sensibilities, and generously philanthropic, especially for social and educative causes.

Courtesy of the Amherst College Archives and Special Collections 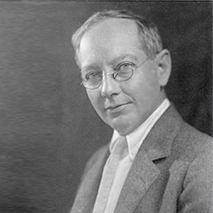 Frederick Law Olmsted Jr., brought with him the skill of his firm, Olmsted Brothers. These diverse and talented professionals could design and implement plans, supervise complex site renovations and collaborate with the multiple disciplines involved.